I also will throw out that I play 4th edition sacrilege! So I look at these adventures differently than the normal 3. I ignore mechanics like Challenge Ratings traps etc. I look for pure story, characters, and things that would spark my players' imagination since I'm re-creating all the combat encounters. Usually in an undead heavy adventure there are little opportunities to role-play since so many undead are un-intelligent. This adventure avoids that completely. There are many opportunities to role-play as well as very interesting characters.

The characters are fleshed out enough to capture my attention and get me intrigued enough to plan how I will act out each one. In my opinion they need a tad more personal touches but the seed of personality is definitely there to make me want to do that. It doesn't hold your hand and tell you which ones to best employ though. It's up to you and your style of DM'ing. Spoiler: It starts out with the classic scene of zombie hordes unleashed on the unsuspecting town.

The party has to stop them from eating the commoners. If you enjoy putting commoners in peril to create tension this works beautifully. I absolutely love that type of zombie scene and wish it showed up more often in modules, think "Dawn of the Dead", "Planet Terror". The party then has to travel to an ancient tomb created by some holy knights to imprison a great evil presence. Seems like it might fall into being a dungeon crawl but there are lots of talking encounters and characters amply mixed throughout.

The plot is somewhat simple so I will go into the things that I like about the module: the characters and the scenes depicted. Spoiler: While the gravedigger is probably one of the better characters to be in a module in a long time, my favorite encounter is with the mage transformed into a worg. A voice calling out from behind a tree stating "Please do not attack me, my appearance may disturb you" just sparks the imagination like no other way.

I would enjoy if the transformed wizard could offer tangible help like a helpful clue, potion, or something if befriended but info is valuable too. There are some great scenes created from Tim Hitchcock's imagination that jump from the pages: One room is filled two feet deep with loose re-animated eyeballs and combined with a gibbering mouther.

I would hate to walk through that room stepping on eyeballs. There is a severed undead head in a magic cage that enables the head to speak.


It is a dwarf who figured out all the traps in the tomb. That is a completely awesome idea! I plan on having him know about all the traps and layout of the dungeon but be very angry at being trapped in his cage and not helpful at all unless the party is extremely diplomatic. This is exactly the sort of stuff that is in the module that holds so much potential but the module doesn't tell you how to use it, that part is up to you.

It's great, but for novices and DM's that lack creativity it might have been easier for the author to give more character traits to those NPC's. I think it's awesome that the party has a good chance to carry around an angry dwarf head that knows all the secrets of the dungeon but might be unwilling to help them and complains alot. The main villain has an ability to be able to see and speak through all of his minions. This allows for a constant dialogue of threats, taunts etc between the villain and the party. I absolutely love love love this, I haven't seen any other adventures where you get to dialog with the main villain the entire adventure. 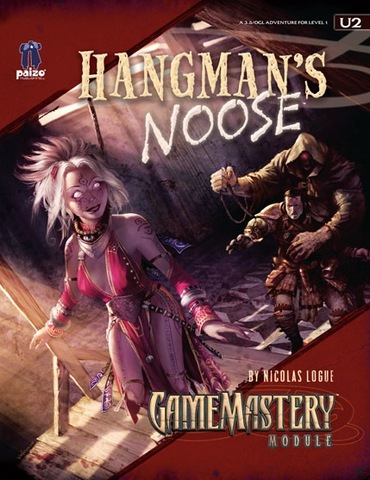 Again it's personal style how a DM wants to use that but the power is mentioned once and not told explicitly to a DM to take advantage of it. Maybe paizo should write a "How to be a good DM guide".

My only criticism is that while the adventure does put forth a short backstory on the main evil guy, it could use more. I added a small story of an evil lich who lived years ago and had an obsession with eyes because his eyesight was failing. He abducted people from town and ripped out their eyes and performed experiments to craft himself new eyes. This is the evil force that the knights put a stop to and made the tomb to entrap.

I let the players uncover this eloquent story with a knowledge history check. I like how history checks let you flesh out the story and characters even more. Even if they failed the check they might be able to read it in the library of the adventure. I would add something like that to improve this adventure. Usually a dungeon crawl is room full of monsters, followed by next room full of monsters. This module is totally not like that, you get to speak with and encounter different personalities, but you as a DM, have to expand on the excellent seeds that Hitchcock wrote.

Tim, if you felt the need to talk, why didn't you shoot me an email? Sorry about that Chris, perhaps next time I will.

I didn't mean to offend here, however a public criticism can be publically countered I suppose. Basically I was was just trying to clarify a few points for someone interested in the Module. Thanks James!


Glad you liked the Mod!!! BtW where in NYC are you? I'm in SI right next to the ferry terminal. I have not played it but read this adventure and I liked it. I am with what some of the others have said. I don't mind a few typo's or bad stat blocks ect. I buy adventures for good stories that are interesting and fun to play. I can tweak the other stuff and typically do anyways so thats not a problem. But then i am in the minority of I would rather adventures have no stat blocks other than for mobs not in the main MM to save space for more adventure other than obviously ones that have class levels or are a one of a kind then they have to.

I feel I can get a index card and fill it out for stat blocks before the game and stick them in the adventure pages for when i run it and save space. Page 10, "He detects as evil, though the entire area is faintly suffused with evil, and his alignment could easily be a result of the dark power embodying him. Where in the rules does it say that an evil goblin doing a good act doesn't detect as an evil creature?

Or that a good outsider doesn't detect as good? It's obvious that he looks pretty undead "the wolf looks unhealthy, perhaps even undead" , and him being "cursed" into that form is a perfectly suitable explanation for why he detects as evil. And why do the PCs need to have a DC to determine exactly what kind of undead he is and what his powers are?

No, Luc has that spell in his spellbook. He doesn't have it prepared Not every ability requires a one-paragraph writeup in a stat block. Perhaps if you read the very next sentence, which says "unless the PCS are willing to give whatever controls the undead two full days with no interruptions to work on its plans. It's not a Disable Device check. You'd have to use darkness, pass the eyes with invisibility, cast dispel magic, etc. Because they're not traps any more, they've been repurposed as weapons. They don't go off automatically.

The wraith has no head Being headless isn't really a hindrance. And there's nothing in the stat block that says it's blind. Blindsense does not mean blind. Fortunately, GMs are not robots, they are humans with brains, and sometimes they have to make rulings on things, even obvious things. Lucimar's ability is introduced like it would have been in a 1st edition adventure. It always irked me that, if I wanted to stay true to 3rd edition spirit, i would have to find a speicific spell or make up an ability for the monster to do XY.

Spoiler: There is not spot DC for the players to notice the magic eyes in the well wall. There is also no AC, hardness and HPs stated for palyers who want to destroy them.

Starfinder: Attack of the Swarm!

Lastly we don't know if the eys have darkvison and what their spot check is. An experienced DM can wing it, but a Newbe might struggle here. Good day, Sean. Thank you for the courtesy of a reply.