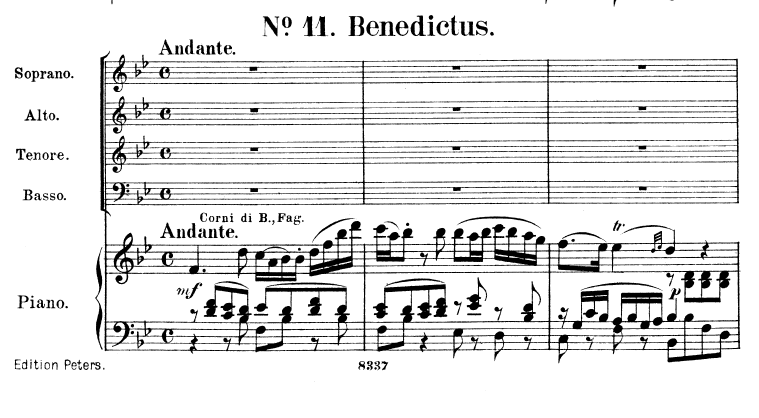 Allegro", "Symphony No. The Kyrie is a double fugue, with one subject setting the words " Kyrie eleison " and the other " Christe eleison ". The movement Tuba mirum opens with a trombone solo accompanying the bass. The Confutatis is well known for its string accompaniment; it opens with agitated figures that accentuate the wrathful sound of the basses and tenors, but it turns into soft arpeggios in the second phrase while accompanying the soft sounds of the sopranos and altos.

Template:Classical movement header. At the time of Mozart's death on 5 December , only the first two movements "Requiem aeternam" and "Kyrie" were completed in all of the orchestral and vocal parts. The "Sequence" and the "Offertorium" were completed in skeleton, with the exception of the "Lacrymosa", which breaks off after the first eight bars. The vocal parts and the continuo were fully notated.

Occasionally, some of the prominent orchestral parts were briefly indicated, such as the first violin part of the Rex tremendae and Confutatis , the musical bridges in the Recordare , and the trombone solos of the "Tuba Mirum". What remained to be completed for these sections were mostly accompanimental figures, inner harmonies, and orchestral doublings to the vocal parts.


The eccentric count Franz von Walsegg commissioned the Requiem from Mozart anonymously through intermediaries. The count, an amateur chamber musician who routinely commissioned works by composers and passed them off as his own, [1] [2] wanted a Requiem Mass he could claim he composed to memorialize the recent passing of his wife.

Mozart received only half of the payment in advance, so upon his death his widow Constanze was keen to have the work completed secretly by someone else, submit it to the count as having been completed by Mozart and collect the final payment. In addition, a striking similarity between the openings of the Domine Jesu Christe movements in the requiems of the two composers suggests that Eybler at least looked at later sections. Template:Explain After this work, he felt unable to complete the remainder, and gave the manuscript back to Constanze Mozart.

Some people consider it unlikely, however, that Mozart would have repeated the opening two sections if he had survived to finish the work. The Agnus Dei is suspected by some scholars [4] to have been based on instruction or sketches from Mozart because of its similarity to a section from the Gloria of a previous mass Sparrow Mass , K. Others have pointed out that in the beginning of the Agnus Dei the choral bass quotes the main theme from the Introitus.

Template:Citation needed. Another controversy is the suggestion originating from a letter written by Constanze that Mozart left explicit instructions for the completion of the Requiem on "little scraps of paper. The various complete and incomplete manuscripts eventually turned up in the 19th century, but many of the figures involved left ambiguous statements on record as to how they were involved in the affair. This acceptance is quite strong, even when alternative completions provide logical and compelling solutions for the work.

The confusion surrounding the circumstances of the Requiem's composition was created in a large part by Mozart's wife, Constanze Template:Citation needed. Constanze had a difficult task in front of her: she had to keep secret the fact that the Requiem was unfinished at Mozart's death, so she could collect the final payment from the commission.

Once she received the commission, she needed to carefully promote the work as Mozart's so that she could continue to receive revenue from the work's publication and performance. During this phase of the Requiem's history, it was still important that the public accept that Mozart wrote the whole piece, as it would fetch larger sums from publishers and the public if it were completely by Mozart.

It is Constanze's efforts that created the flurry of half-truths and myths almost instantly after Mozart's death.

According to Constanze, Mozart declared that he was composing the Requiem for himself, and that he had been poisoned. His symptoms worsened, and he began to complain about the painful swelling of his body and high fever. Nevertheless, Mozart continued his work on the Requiem, and even on the last day of his life, he was explaining to his assistant how he intended to finish the Requiem.